Coming Back to the Past

In 1992, when I was 9 years old, my class went on an outing across the road to the Education Museum in Aliwal Road, Wynberg, Cape Town. I had always loved museums, old things and history, but this visit was something special and stands out in my memory as an important moment in my life because it was the day that I met Dr Sleigh, then curator of the museum. I remember his baggy jersey, his ruffled white hair, and, of course, the marvelous extent of his knowledge about all things. My little heart fell in love with him because there I saw, for the first time, the way in which history could live and do and breathe, the way in which it could be touched and interacted with. It didn’t have to be limited to books and dusty displays behind glass.

I began to visit Dr Sleigh regularly in the afternoons after school, no doubt making a nuisance of myself! I had already started accumulating old bottles and other curiosities by then, and later that year when the museum hosted a competition for collections, I entered my “Bottles and Bygones” collection, being awarded the prize for most enthusiastic collector. It remains one of the proudest days of my life, meaning more to me than other awards I have received over the ensuing years. 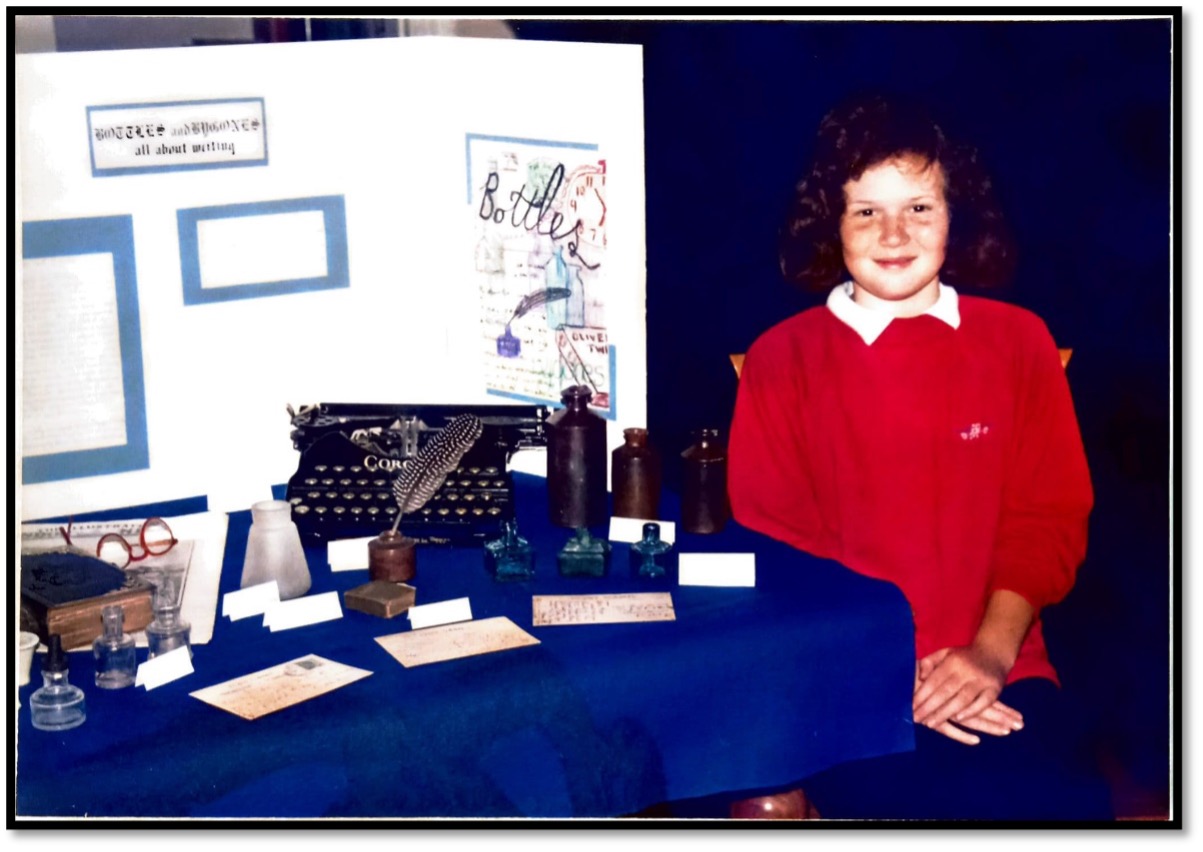 My Bottles and Bygones collection, 1992

I continued with my collection and my interest in history, still visiting Dr Sleigh. Then, in 1994, he encouraged me to enter the Education Museum’s history project competition, suggesting the topic of early medicine at the Cape. I did so with gusto, and again received an award – this time a book: Oriental Ceramics at the Cape of Good Hope 1652-1795 by C.S. Woodward and published by Balkema in 1974. I was too young to appreciate the book at the time, though I did attempt to read it at various intervals over the years, but it never captured my attention. It remained on my bookshelf, untouched for longer than I would care to say. 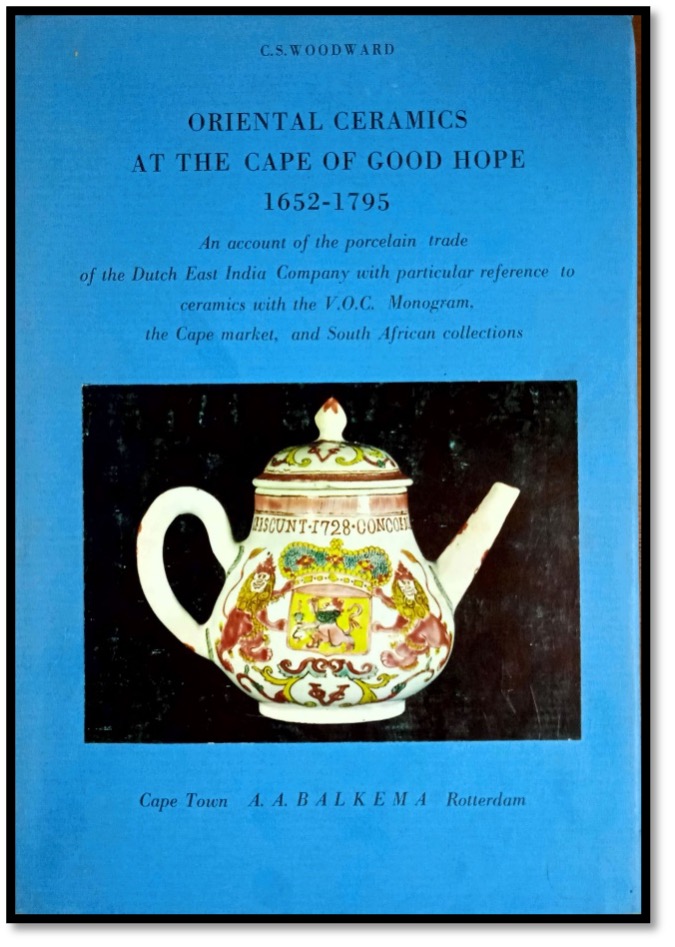 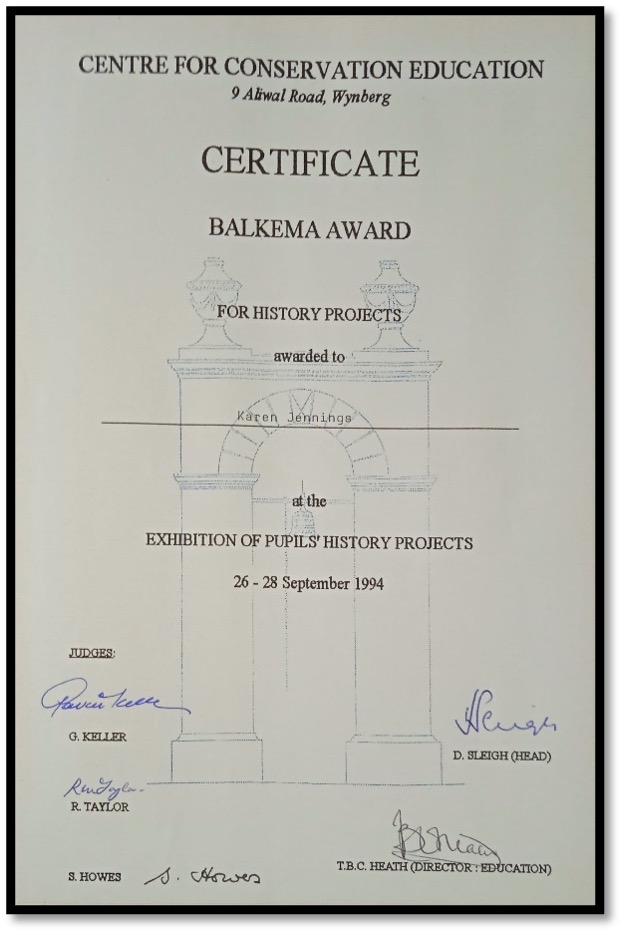 Book and certificate awarded to me for my project on early medicine at the Cape, 1994

Skipping forward a few decades, in 2015 I moved to Brazil with my Brazilian husband. I found it a great challenge to adapt to a new culture and language; indeed, to an entirely new landscape and climate. Though the world can feel small at times, it can also feel vast and alien and isolating at others. I struggled to, for lack of a better phrase, understand “my place” in the world. I felt lost, with no idea what to do with myself or my life. I had shipped my collection of old bottles and bygones over (though some broke during the long passage across the ocean), as well as the book on ceramics at the Cape. I displayed them in our home and used to sit looking at them as I sweltered in the tropical heat while toucans and araras (parrots) cried nearby and monkeys chattered in the trees (we lived next to a nature reserve). They were idyllic days in some ways, but without purpose.

When the pandemic arrived, I decided to grab time by the forelock, to no longer simply sit looking at these objects of a past that I had lost, but to finally pursue my long-time dream of completing a PhD in History. I enrolled at the University of Johannesburg under the supervision of the wonderful Cape historian, Gerald Groenewald. I had originally wanted to explore natural history in some way, but was not quite certain how. Gerald very kindly pointed me in the direction of Zacharias Wagenaer who had been the second commander of the Cape after Jan van Riebeeck. I was astounded when he told me that Wagenaer had started his career in the Dutch West India Company in Brazil, as I had been unaware of the Dutch presence in Brazil before that. He also informed me that Wagenaer had produced a book of paintings and descriptions of flora and fauna in Brazil, entitled Thier Buch. I began to read about this man with interest, marveling at his drawings of animals, some of which I had encountered, some of them not (after all, Brazil is a massive country and Wagenaer and I had lived in very different parts). Yet, despite the matter of time and distance, there was something strangely comforting in learning about his experiences and of trying to imagine his difficult ocean passage to Pernambuco, of his being confronted with diseases, of his encounters in a new land, with new people, new ways of being and thinking, his ordeals due to a general lack of food and supplies. Though our experiences were clearly very different, reading about his made me feel less lonely, less like I was stagnating in a faraway place without an idea of what my future would hold. It was, in its own muted way, my own adventure. 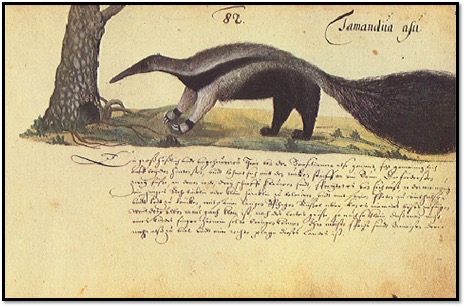 Drawing and description of a tamandua (anteater) by Zacharias Wagenaer in his Thier Buch. I was fortunate enough to see one early one morning while I was walking the dogs.

I read, too, of his further journeys, of how after leaving Brazil he joined the VOC and travelled all over the Dutch empire, including Japan, where he served as opperhoofd of the Dutch factory at Deshima in 1657 and 1659. There he was involved in trying to encourage Japanese production of replica Chinese porcelain. In the process, he learned a great deal about the subject, knowledge which he took with him a few years later when he became commander at the Cape of Good Hope and encouraged the production of pottery there.

It was then that I remembered the book on ceramics that I had been awarded in 1994. I dug it out (by now it was in storage, as we had moved away from the idyllic nature reserve in Goiania and into the cement- and tar-filled urban jungle of Sao Paulo due to circumstances related to the pandemic). Simply holding it in my hands once more, this treasured possession that I had never read, brought back to me memories of my old friend, Dr Sleigh, and of those happy afternoons when I would visit him and wander through the Education Museum, those days when history was brought alive all around me and I felt the thrill of possibility for my own future. I remembered walking across the stage to receive the book at prizegiving, my father’s pride, his comment that it was a very special book, I remembered wrapping it in bubble-wrap before it was boxed and shipped to Brazil, making sure that it would be safe and come to no harm. I began to feel, once more, that decades-old thrill, to feel that I could, yes I could, be part of bringing history to life.

Shortly thereafter, I joined the VOC Foundation and found myself reunited with Dr Sleigh, digitally across this distance. Dear Dr Sleigh, who looks the same as he did all those years ago, wearing the same baggy jersey, his hair as unkempt as ever. There is comfort in that too, as though I have stepped into that museum again, aged 9, and come home to not only myself but to a sense of wonder and purpose.