The Past and Ourselves

Recently, something I wrote received some international attention. The work touches on the legacy of colonialism in Africa and how its impact might be felt in certain contexts. In interviews this is what people kept coming back to – what right does a white person have to write about such matters? Of course, the question is an important one and wholly justified.

Questions like that must be asked. However, I am not here to answer it at present; this is not the platform for it. Rather, what interests me is the ways in which we as individuals and as societies engage with the past. For some it is sacred and it must be protected, remaining unaltered. For others it is a source of anger and bitterness. Or perhaps of shame. Some might be fascinated by certain aspects, like a particular ancestor, or a style of clothing, or the ways in which technology developed. Each one of us has an interest in the past; indeed, we each have our own personal history, and each one of us is entitled to lay claim to a part of the grand history of the world.

The past is never only told by one person, never peopled by only one character. Even facts, let’s be honest, are not as set in stone as we would like them to be. Perhaps a date has been recorded incorrectly, or a name, maps are unreliable, drawings of “exotic” plants or animals can be laughably inaccurate. And let’s not forget that statues tumble, the names of buildings and roads are altered. Nothing remains the same in unending time. What, then, are we left with?

In effect, we are left with ourselves.

History is about us. It is how we understand our place in the world, not only in isolation but in relation to those around us. The past influences us; it is inevitable. But too often we are instructed in how this influence has occurred. We are told what it means and how we ought to interpret it. Many years ago, I picked up a history of the United States of America. Within the first few pages, the author had said that history can only ever be about the victors; there is no place for the vanquished.

There, in a single sentence, he had decided to erase the Native American histories and cultures from the narrative. Simply done, flippantly done. So much easier to write about those whose stories have already been told, stories that are accessible and widely recorded.

If, as I suggested above, history is about ourselves, then it makes sense that each one of us has not only the right, but I would even call it a duty, to investigate it, to interrogate it and learn to understand it as thoroughly as we can. How else can we exist, truly exist with those around us, if we deny them their place in history or if we want them to sit and listen to our narrative only, ignoring theirs?

I am thinking now of the recent (excellent) “Slavery” exhibition at the Rijksmuseum in Amsterdam where the lives of both enslaved people and those who benefited from slavery are examined. One of the objects in the exhibition is a finely engraved seventeenth-century golden collar that had been donated to the museum in 1881. At that time, it had been labelled as a dog collar. When the curators began to prepare for their “Slavery” exhibition several years ago, their research showed them that this object had in fact not been designed for a pet, but rather was meant to be worn by a human – specifically by young African male slaves – a sign of being possessed, of being part of another’s fortune.

Now, what is important to remember is that in all this time the collar has not changed. It has been the same golden, ornate object for 300 or more years. What has changed is us. We have taken the time to reevaluate the object, to look at it in new ways. And through this act, we have been able to come to a greater understanding of ourselves, however unpleasant that might be. 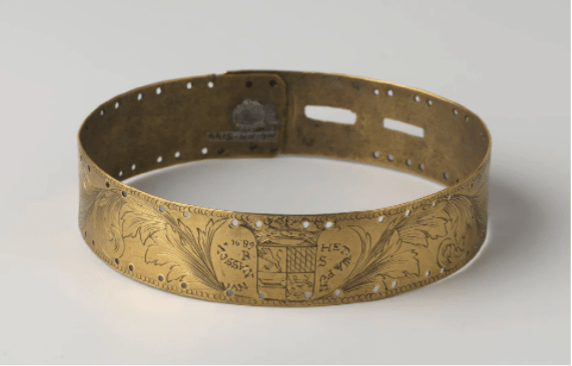 Consider an ordinary object – something that you have with you right now. A cheap T-shirt from a fast-fashion clothing store, a sparkly little purse. Whose hands have created these items and under what circumstances? You do not know. But what would you do if you did know that a small child worked day and night in a sweatshop to produce that piece of clothing? Or that someone on the other side of the world was being held captive to make thousands of fun objects for mass consumption? The hope is that you would feel something, no need to put a name to it precisely. Certainly, your view of the object would change, and of yourself. More importantly, your view of the world, and your place in that world, would be altered.

People grow frightened when history is interrogated. They think it is about erasure or about claiming one narrative and denying everyone else the right to one. But that is not the truth. Because history represents us, it is something that cannot be allowed to stagnate. It must be permitted to grow and breathe and move. If we can allow it to do that, then we too will flourish.

You can access the Rijksmuseum “Slavery” exhibition here: Slavery Exhibition